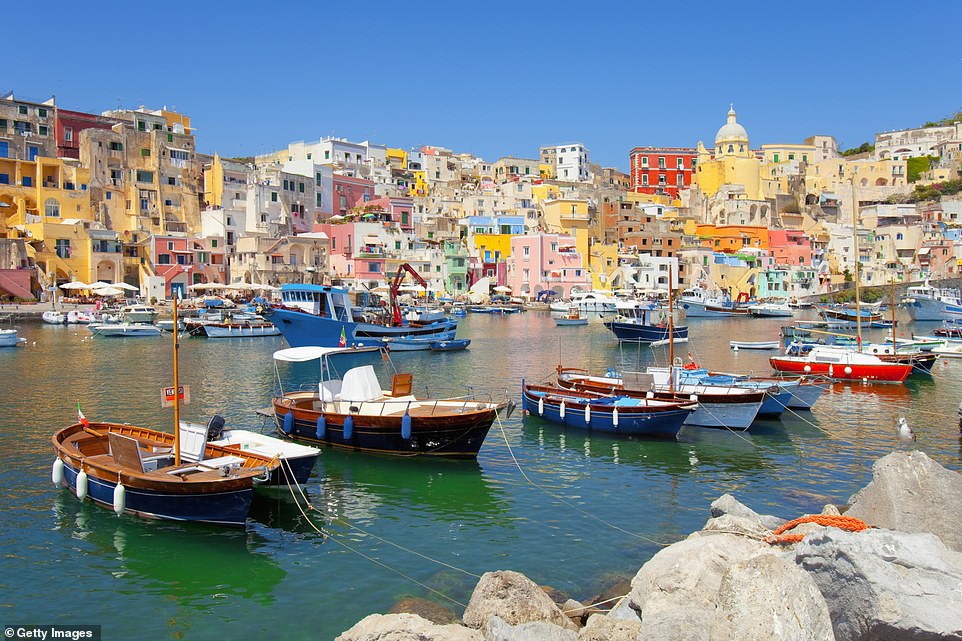 Faded fishing boats bob in the water at Marina Grande, while behind them ice-cream-coloured houses in shades of pistachio, peach, raspberry and lemon are precariously perched, higgledy-piggledy, around the bay. As you arrive, this is the first glimpse you will have of Procida, a picture-postcard-perfect Italian island that’s recently been chosen as Italy’s next Capital of Culture.

Some 14 miles off the coast of Naples, it takes just 40 minutes to arrive at the marina by hydrofoil, but it’s a world away from the gritty city you’ve left behind.

Despite the island’s pretty, winding streets being the scenic backdrop of films such as The Talented Mr Ripley and Il Postino, Procida has been largely overlooked by tourists, with many preferring to visit the glitzy neighbouring isles of Capri and Ischia.

Authentic: Marina Corricella is full of ice-cream-coloured houses in shades of pistachio, peach, raspberry and lemon 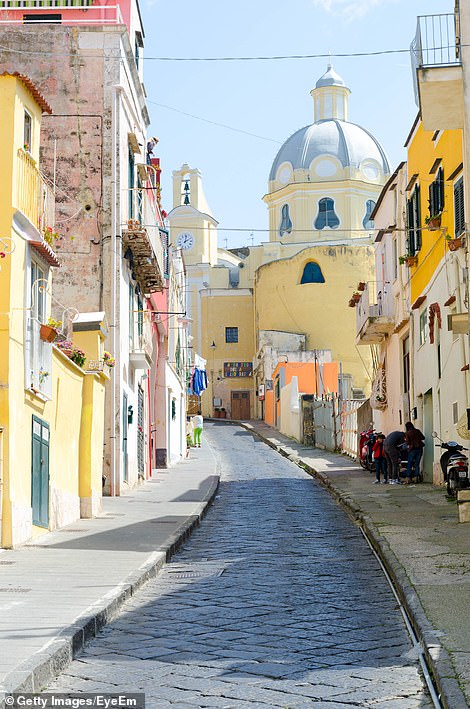 One of Procida’s quiet cobbled streets

By comparison, Procida is quieter and far more low-key, and oozes with authenticity.

With just 10,000 residents and at two-and-a-half miles wide, you will get the sense that most people know each other well.

Everyday scenes of local women passing the time of day by the marina wall, or fishermen chatting as they meticulously mend their nets, are par for the course.

Holidaying here means you will be eased into the very essence of ‘slow travel’ – one of the reasons, no doubt, why the destination has won its prestigious award.

When it was announced that Procida had been selected, boats and ferries sounded their horns in the harbour and church bells rang out in celebration. Locals hung Il Tricolore flags from their balconies.

‘It’s the first time any island has been awarded Capital of Culture,’ says Agostino Riitano, director of the Procida 2022 campaign.

‘So we were understandably proud. It represents a shift away from focusing on our big cities of art to the extraordinary heritage found in these smaller, southern destinations. We think of Procida as the symbol for the restart of Italy following the pandemic. It is an extraordinary opportunity for such a little island.’

Found in Corricella, the oldest and most picturesque fishing village on the island, San Michele (sanmicheleprocida.com) is one of the destination’s most enchanting hotels. It won’t take you long to get there because, well, it doesn’t take long to get anywhere – it’s just a 15-minute stroll from the main port.

The boutique retreat is carved out of an artfully whitewashed townhouse and has a bohemian sense of style. With just 12 bedrooms and an alfresco seafood restaurant, Il Pescatore, it gives plenty of nods to the soul of Procida. Natural elements – such as rough-hewn tables, woven rugs and rattan lampshades, all locally made – are set against a striking, white- on-white palette.

‘Procida is authentic,’ Marina Caliendo, the laid-back manager at San Michele, tells me. ‘Many traditions are still passed on from generation to generation. There’s still a big focus on families eating together, for instance – we call it the “family meeting” – something that is dying out in many other parts of Italy. At the hotel, we try to capture this with cookery lessons in which guests can learn more about our local dishes, such as rabbit alla Procidana or spaghetti with sea urchins.’

San Michele is typical of the characterful places to stay on Procida. There are no big resorts – instead you’ll find a handful of inviting boltholes, such as La Cantina dello Sgatto, a rustic B&B in the north-west of the island, or tiny, revamped fishermen’s houses for hire.

Via Roma is the main street and it’s dotted with tabacchi, tiny craft shops, bars and restaurants. An essential stop is at Bar Roma, where you can taste another island speciality – lingua di bue, a puff-pastry parcel filled with lemon cream.

The sweet treat is actually sold throughout the island and is typically eaten for breakfast, but it was at Bar Roma where it was invented in the 1950s. 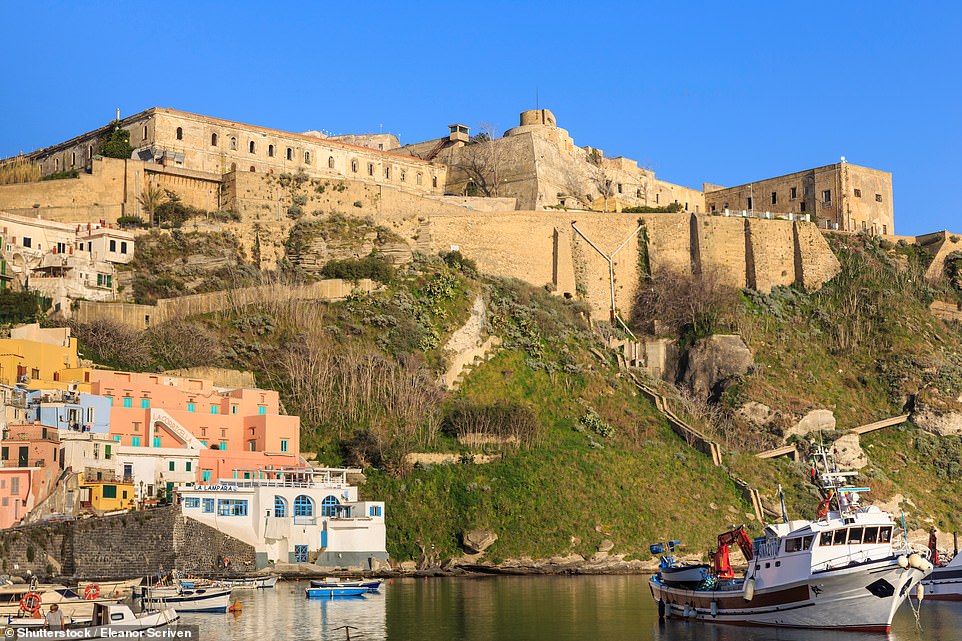 Terra Murata is the historical heart of the island where you’ll find a medieval fort, the 16th Century Abbey of San Arcangelo and an ancient palace 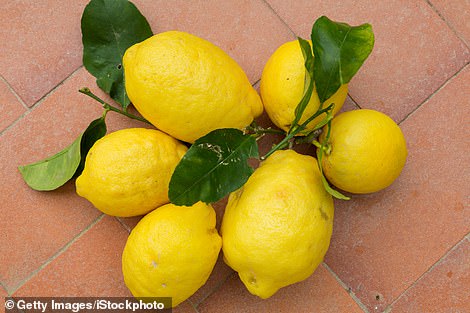 Lemons are big in Procida – many of the island’s dishes, from crisp salads laced with sliced sweet pith to pasta smothered in a creamy lemon pesto, use all parts of the citrus fruit

Lemons are big here – in all senses of the word, with some growing to the size of small melons, and many of the island’s dishes, from crisp salads laced with sliced sweet pith to pasta smothered in a creamy lemon pesto, use all parts of the citrus fruit. At Il Gazebo, near Marina Grande, lemon-stuffed sea bass is on the menu – delicious with a glass of local Falanghina wine.

At La Pergola, in the centre of the island, you sit under trees laden with lemons, the sharp scent filling the air, and feast on spaghetti alle vongole and lemon tiramisu.

At the highest point of Procida is Terra Murata, the historical heart of the island. As well as a medieval fort, there is the 16th Century Abbey of San Arcangelo and an ancient palace, the Palazzo D’Avolos, which was an aristocrat’s home and later, until 1988, a prison. The old palazzo is now one of the projects benefiting from the €1 million City of Culture award. It will be reborn as an arts centre with its estate transformed into a newly imagined park. Next year a further 44 initiatives, spanning art events, architectural regeneration and sustainability ventures, will crop up.

On a clear day, from here you can gaze at the Bay of Naples across the alluring Tyrrhenian Sea. At times you may even spot the resident dolphins playing in the deep waters.

Some of the best beaches, such as the black-sand Spiaggia Pozzovecchio, known as ‘Il Postino’ due to much of the film being shot here, and Spiaggia della Chiaiolella, loved by families for its clear, shallow sea, look as if they are almost within touching distance.

In reality, many of the beaches are well hidden and accessed only via steep stairways tucked away behind tumbling bougainvillea or gnarly olive trees. If you are lucky, you’ll spot a sign pointing in a vague direction. It all adds to the charisma of the place, and means that when you do finally sink your toes in the sand you may well have a little stretch of coastline to yourself. Soaking up the sun in blissful isolation, it’s easy to worry that things may soon change.

Raimondo Ambrosino, the mayor of Procida, is aware of the conundrum. He says: ‘Being crowned Italian Capital of Culture for 2022 is a great responsibility. We welcome it with the knowledge that we must defend our identity, our values and our rituals. After all, these are the characteristics that will attract visitors to our island.’

What’s occurred to Joe Walsh Excursions, and the way do I get my a reimbursement? 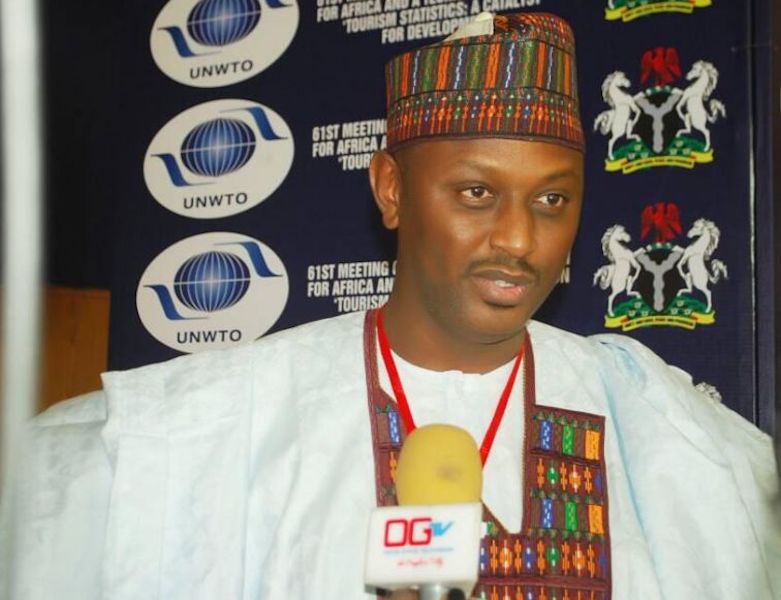 Step Inside Some of the World’s Most Historic Hotels